A very quiet month in the NGB league thanks to a mixture of people forgetting to submit their scores and many patchers being away from patches at their universities. There's no change in the top 3 in the comparative league with the top 2 both being away from patch for the entire month.

The main change in the points league sees Jonathan Farooqui move up into second place on his Druridge Bay patch, a Cuckoo being a highlight there. Cathal Forkan had the best month in the league at Galway Bay where he managed to rack up 16 points and move up into the top 10 with seabirds dominating including Balearic Shearwater, Storm Petrel, Little Tern and Little Gull.

July sees migration starting up again so expect a few higher scores coming in this league in the next couple of months. 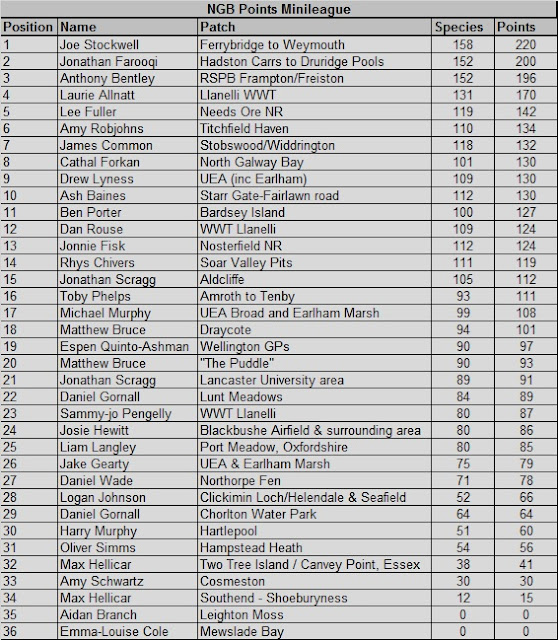 Dan Rouse - A Rocha Bird Observatory, Portugal
Been a great week out in Portugal at the observatory, despite having gone to Portugal a number of times it was only this time did I actually do some ringing. The heat was the biggest issue of the day, the first bird pulled out the bag was a Juv House Sparrow and the birds continued to be less interested until there was one bag left, one of my favourite birds of Portugal: Azure Winged Magpie! As much as I love them, they don't half hurt when they get you good. More common birds continued to fill the nets until a Sardinian Warbler flew into the net in front of me and then a Short-Toed Treecreeper were both major highlights for me!

Zac Hinchcliffe & Jonnie Fisk - Spurn Bird Observatory
Jonnie Fisk had the pleasure of ringing a Marsh Warbler at Spurn. Zac, having managed to avoid them so far controlled a Sparrow Hawk which was first ringed at MigFest at Spurn the year before. 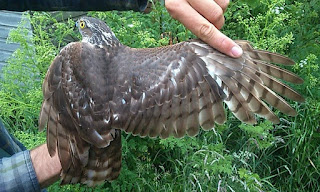 Josie Hewitt - Hampshire
In my garden, June saw the arrival of lots of fledged Starlings. I hadn't really done many Starlings before now so my aim was to catch and ring as many as I could. Using one potter trap over 3 weeks in June I managed to trap 26 Starlings, both adults and juveniles. I think their eyes are fascinating and there is so much variation with them that I decided to take some photos so that if I re-trap any of them as adults then I can see if the iris colour is any indication of sex. I decided to do this because I have been told conflicting things by different people as to whether you can or cannot sex juvenile Starlings based on iris colour. Hopefully I'll re-trap some of the birds once they've done their post juvenile moult and so I can use other criteria to try and sex them. 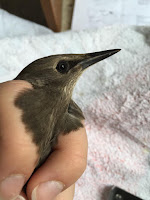 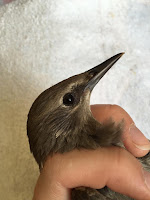 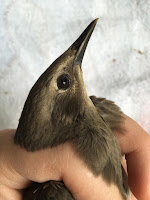 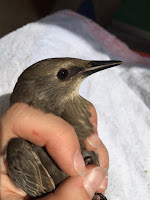 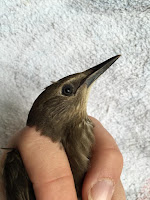 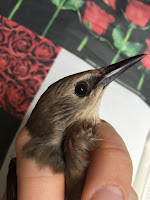 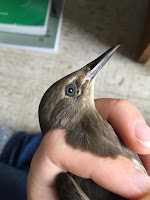 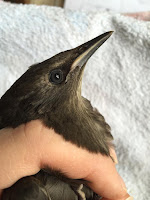