After a long (18hr) flight via Bogota (where I’d already added 5 new species from out the window!- Brown-bellied Swallow, Tropical Kingbird, Rufous-collared Sparrow, Great Thrush and Andean Lapwing), I finally touched down in Quito airport, tired, but itching to go birding! I was picked up from the airport by one of Bellavista Lodge’s (where I’d be volunteering for the next 2 months) drivers, on the 2 hour drive to the lodge we made our way through Quito’s hot, polluted and busy streets and into the Cloud Forest, I managed another 3 new species: Black Vulture, Eared Dove and American Kestrel. 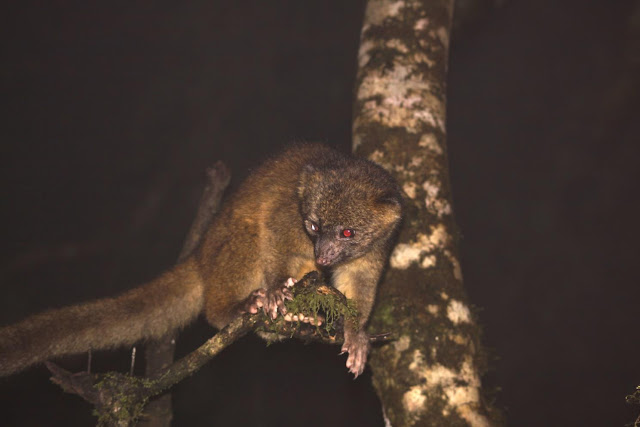 When we finally made it to the lodge I grabbed a bite to eat and Nelson Apolo, one of the guides there took me birding round one of the trails, new species came thick and fast.. 43 of them in fact! That evening I got two mammal ticks: Olinguito and Tayra. The next day I got lots more lifers, the best of which being a Common Potoo sat on one of the buildings at night! 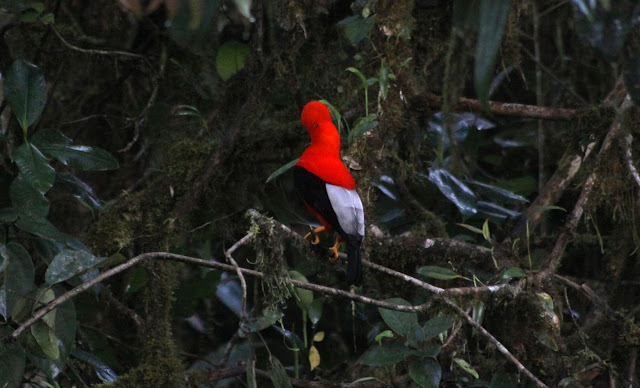 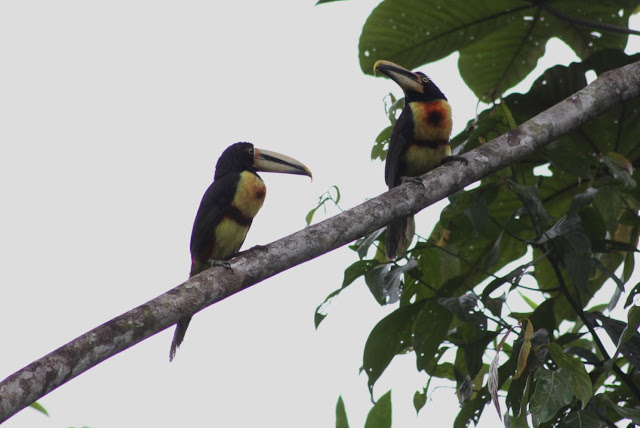 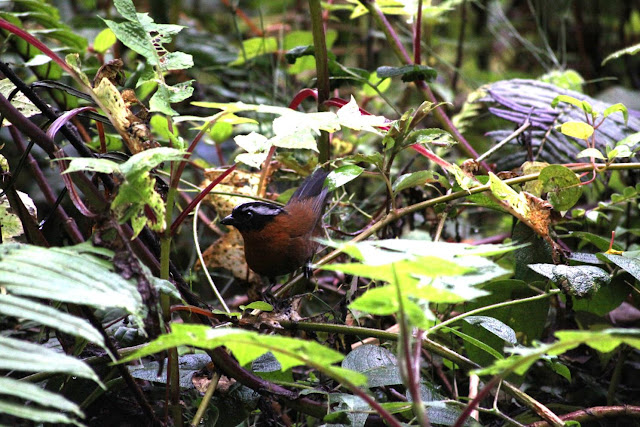 It was finally time for my trip to Gareno Lodge in the Amazon with Nelson, we headed down to Quito with Bellavista transport and from there hopped on a bus to Puyo (a short 9hr journey away.. I found buses in Ecuador tend to be a very cheap and fairly easy way to travel, unlike those back home, In fact it costs roughly the same for the 9 hour journey to Puyo as it would to get a bus from Hereford to my patch at Wellington GPs which takes 20 minutes….), we passed Sugar Cane, Yucca and Balsa Wood plantations on the journey and 9hrs later at 1am we stepped into the humid Amazonian night, found a hotel and quickly fell asleep, the next morning we were up early and headed to a café for breakfast, which involved sampling some of the local cuisine, including ‘chontacuro’- a type of palm-eating grub… not something I’m in a hurry to try again it has to be said! We got a taxi to a nearby reserve called Cascada Hola Vida where highlights included: Paradise Tanager, Yellow-headed Vulture, Thrush-like Wren, Magpie Tanager, Green Kingfisher and a group of Brown-mantled Tamarin monkeys! 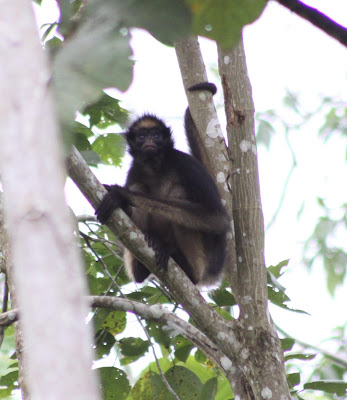 That afternoon we got a bus to Tena where we spent another night. Very early the next morning a pickup truck with one of Gareno’s guides in picked us up from the hotel and we headed to Laguna Pikawe, our first stop on the way to Gareno, as we waited for it to get light the incredible bubbling calls of Russet-backed Oropendolas began emanating from the trees, when it was light enough we piled into a canoe and headed out onto the lake, new birds started appearing.. American Purple Gallinule, Chestnut-eared Aracari, Lettered Aracari, Striated Heron, Crested Oropendola, Orange-backed Troupial, White-bearded Hermit, Speckled Chachalaca, Grey-necked Wood Rail, Amazon Kingfisher, Slender-billed Kite, Gilded Barbet, Black-fronted Nunbird, Dark-billed Cuckoo and the prehistoric Hoatzin, whose young have spurs on their wings like little feathery dinosaurs! we also saw 2 new monkey species: Black-mantled Tamarin and Spider Monkey!! 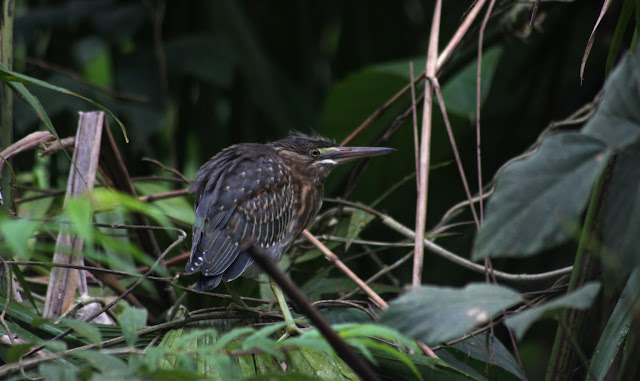 Further along the road to Gareno and deeper into the Amazon we did some more birding, finding species including: Opal-rumped Tanager and Opal-crowned Tanager, Ornate Hawk Eagle, Black Hawk Eagle, Southern Lapwing, Black Caracara and White-winged Swallow. It was depressing how degraded the rainforest looked along all of the roads we’d been along so far, with most converted to agricultural land with just a few sad looking trees left standing and it was only now as we got closer to Gareno lodge did it feel like we were entering proper rainforest.

Finally we reached the lodge with just a few hours of daylight left, we were taken to the day roosts of two of my target species: Rufous Potoo and Crested Owl… what a fantastic start! In the fading light I managed a couple of new species including Yellow-browed Antbird and Spot-winged Antshrike around the huge army ant swarm, which I’ll warn aren’t fun when they start crawling up your legs and getting bitey… they’re no wood ants, these things have serious jaws! As it got dark the rainforest came alive, and the sound was just mind-blowing, an experience I’ll never forget! 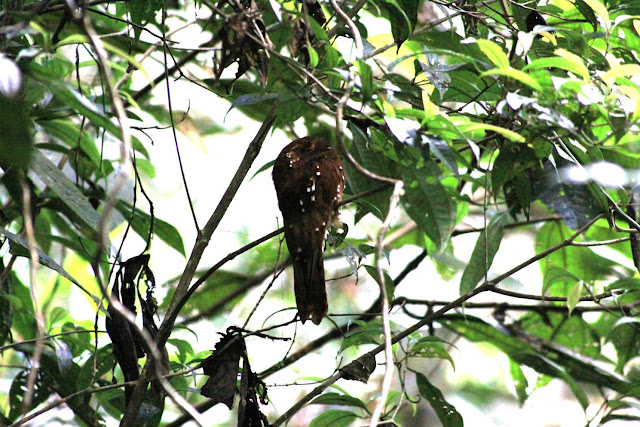 After dinner we went for a night walk to see what we could find, insects everywhere including a monstrous cricket with a body at least 3 inches long!, massive whip-scorpions and tarantulas, frogs, and a snake coiled up in a tree, we heard Tawny-bellied Screech Owl but they evaded our best efforts at finding them with their ventriloquist abilities. The next day we were up at the crack of dawn and the lifers again came thick and fast! The first of these being 2 Cream-coloured Woodpeckers leaving their roost in a bromeliad, another stint at the antswarm revealed a Peruvian Warbling Antbird, a Scale-backed Antbird and the amazing White-plumed Antbird! Highlights from the rest of the day included Boat-billed Flycatcher, Golden-headed Manakin, Olive Oropendola, White-fronted Nunbird, Green-backed Trogon, Speckled Spinetail, Fasciated Antshrike, King Vulture, White-browed Purpetuft, Spangled Cotinga, Screaming Piha, Blue-backed Manakin and Blue-crowned Manakin. Another night walk produced a probable Pit Viper sp, and the Tawny-bellied Screech Owls again evaded us. 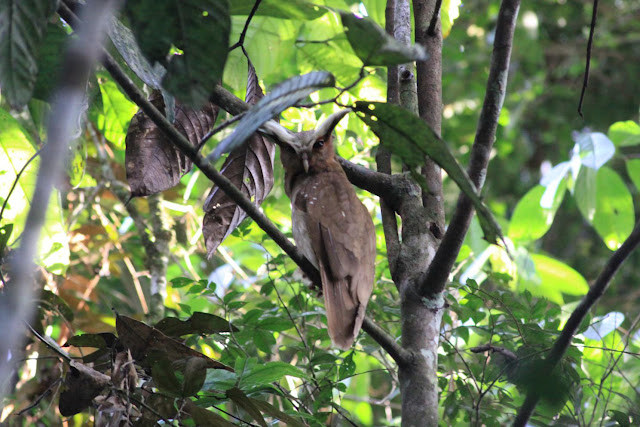 The next morning proved why it’s called a rainforest, torrential rain all morning. Despite this we spent the whole morning birding, getting soaked to the skin but I added two new species, through fogged up bins. Late morning the pickup truck took us back to Tena, via the port town on the Rio Napo to see the group of White-faced Capuchin Monkeys who resided there. From Tena we got a bus back to Quito where I left Nelson who headed on elsewhere and I spent the night in a hostel there before heading back to Bellavista in the morning. 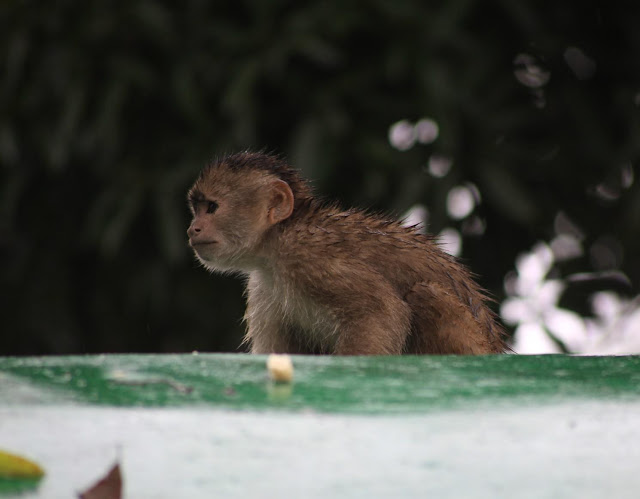 The next couple of weeks at Bellavista were a little quieter and I spent them targeting missing species, I added some good species though including: Tyrannine Woodcreeper, White-faced Nunbird and Barred Becard. 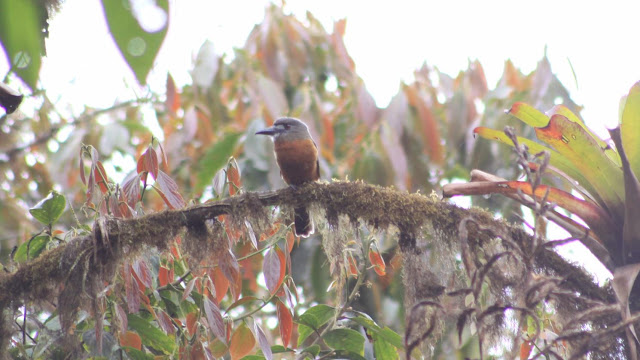 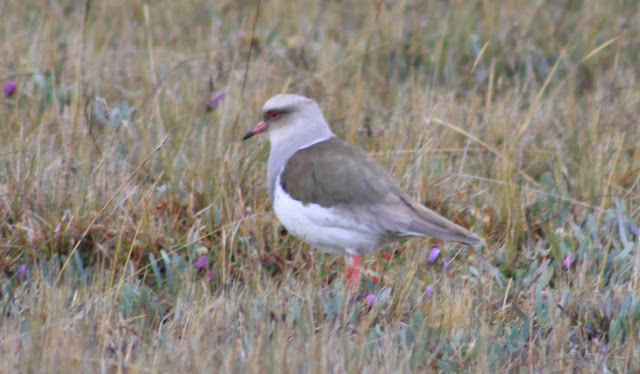 On the 16th I headed up to Antisana reserve high in the Andes above the treeline, although it was a little touch-and-go as to whether we could get there due to the recent eruption of Cotopaxi Volcano which had covered the southern half of Quito in ash (although as usual the media blew it out of all proportion, if you’ll pardon the pun, and it wasn’t half as bad as made out, just a thin film of ash on all the cars was the only indication it happened…). But all was fine and I was soon birding in the high Paramo, highlights included: Andean Coot, Silvery Grebe, Andean Teal, Andean Ruddy Duck, Yellow-billed Pintail, Andean Condor, Black-chested Buzzard-eagle, Carunculated Caracara, Paramo Pipit, Giant Hummingbird, Ecuadoran Hillstar, Shining Sunbeam, Black-tailed Trainbearer, Andean Lapwing, Black-faced Ibis and Paramo Ground Tyrant. There was also a White-tailed Deer. 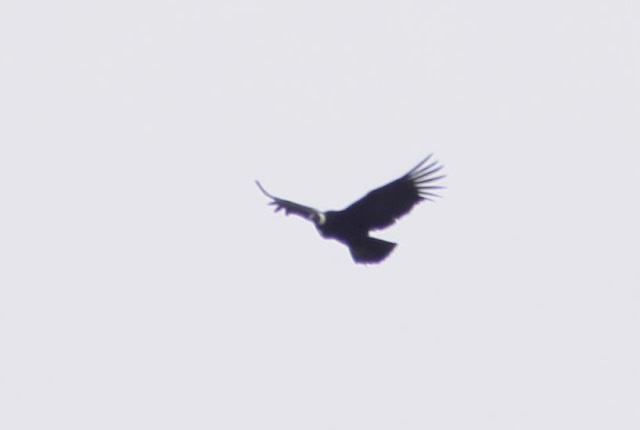 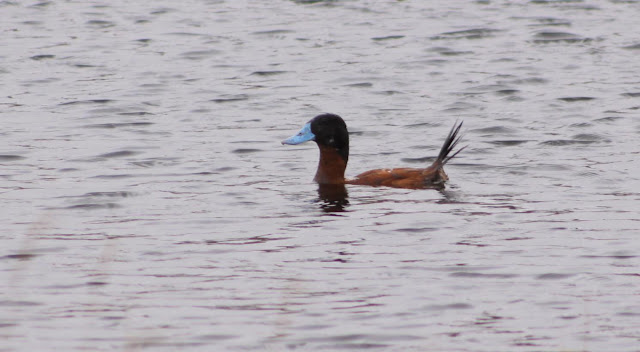 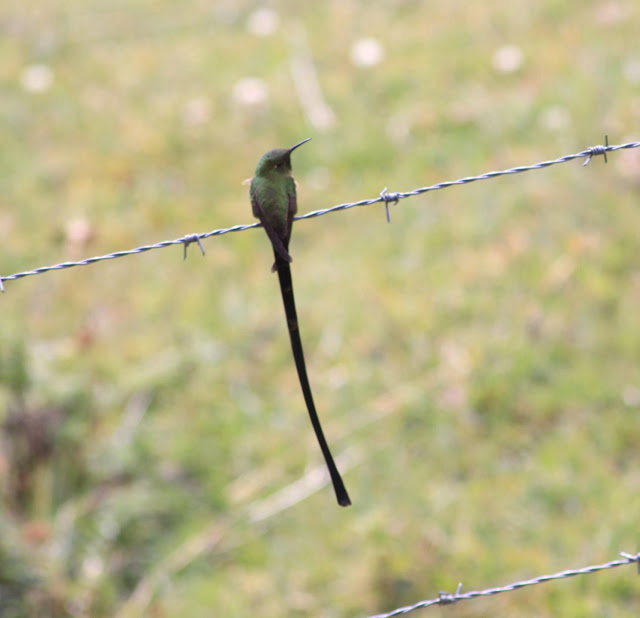 Back at Bellavista I managed to add few new species including Swallow-tailed Nightjar, Undulated Antpitta and best of all the Ocellated Tapaculo which I’d come so close to seeing so many times finally gave itself up, albeit briefly! A fantastic trio of birds! An Andean Slender Mouse Opossum also visited the bananas at Bellavista for two
consecutive nights, which I was pleased with as it’s a hard species to catch up with! 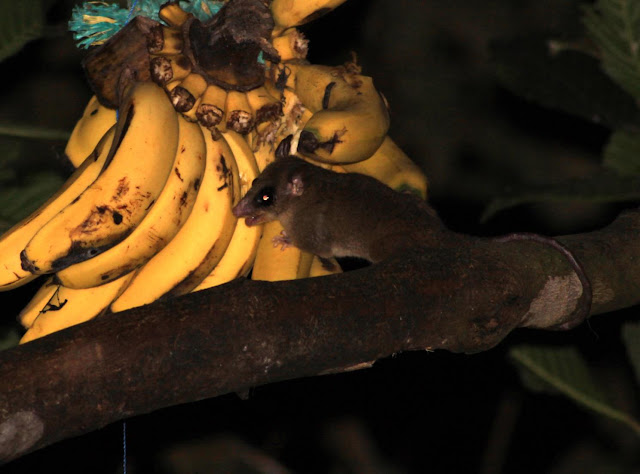 A day hike down to Tandayapa yielded a few new species of which the highlight was a pair of stunning White-capped Dippers displaying on the stream which runs through the village, I could’ve watched them until dusk but I had a Lyre-tailed Nightjar to dip! 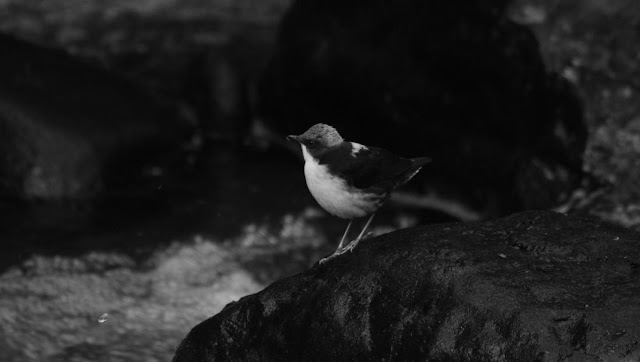 It was now nearing the end of my trip but I still had two more trips lined up to see a few more new species before I headed home, the first of these being another trip down to Angel Paz as I’d heard news of a family of the newly discovered Cloud-forest Pygmy Owl frequenting the area around the Cock-of-the-rock Lek. So I arranged transport down there, but soon learned that they’d not been seen all day today for the first time since they’ve been there, so things weren’t looking too optimistic, but the next day we headed down there anyway and as I’d expected there was no sign of any owls, there were however a pair of very cool Scaled Fruiteaters as some consolation, however, just as we were thinking of moving on one of the other birders who had been there for the lek shouted that the Cloud-forest Pygmy Owl was there, and there they were, bird of the trip for sure!


The next night back at Bellavista I went owling with Nelson and one of the other volunteers Saul, this proved fruitful with an Andean Pygmy Owl found, the closest cousin of CFPO, another great species!
My last trip away from Bellavista was to Silanche in the western lowlands, I got there for first light after spending the night in Pedro Vincente Maldonado, highlights here included Red-capped Manakin, White-bearded Manakin- mechanical clicking sounds and all, Scarlet-bellied Dacnis, White-whiskered Puffbird, Chestnut-mandibled Toucan, Lesser Swallow-tailed Swift, Red-masked Parakeet, Pacific Hornero, Gartered Trogon, White-tailed Trogon, Blue-whiskered Tanager, Little Cuckoo, Rufous-tailed Jacamar, Brown-capped Tyrannulet and Tooth-billed Hummingbird. Back in Pedro Vincente Maldonado I noted my first House Sparrows of the trip- mega! And a single Snowy Egret on a stream. 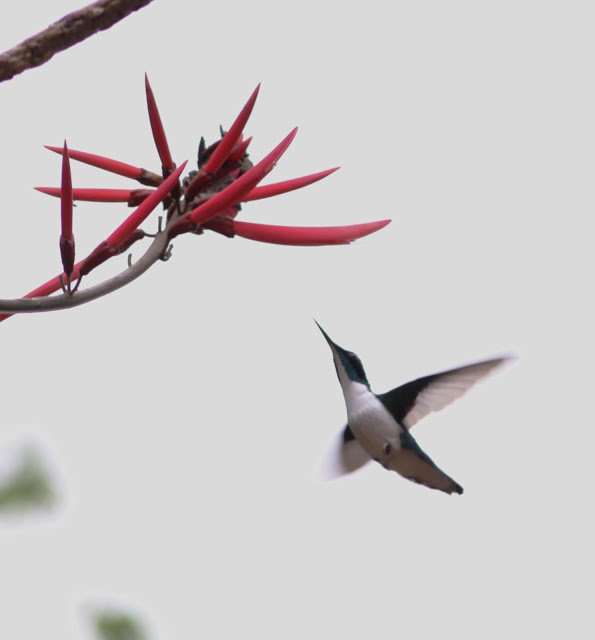 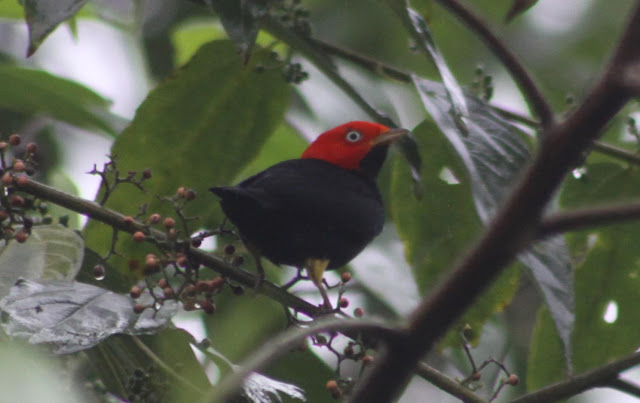 My last week at Bellavista yielded just one new bird species- Marble-faced Bristle Tyrant.
On the 8th of September I headed in to Quito for the final time and once I’d checked in to my hotel in Tababela I got a taxi to Quito Airport Pond, a little known site but well worth a visit for any birder with a few hours to kill in Quito! I saw some great species there and the birding was in total contrast to the rest of my trip! There were 2 Andean Gull, c25 Wilson’s Phalarope, at least 1 Greater Yellowlegs, several Lesser Yellowlegs, good numbers of Pectoral, Baird’s and Least Sandpipers, a Stilt Sandpiper (only the second highland record for Ecuador), several Pied-billed Grebe, a Blue-winged Teal amongst a group of Yellow-billed Pintail, and two Peregrine came through, flushing all the waders, it was like being back home already. 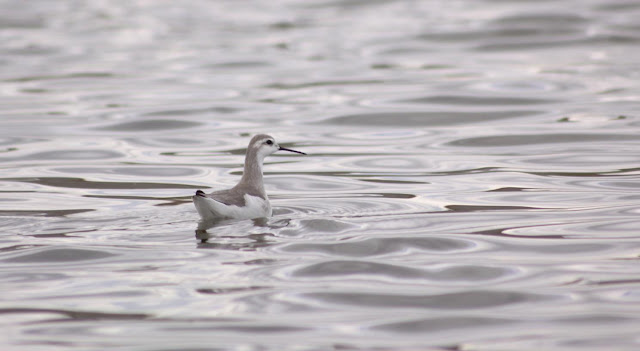 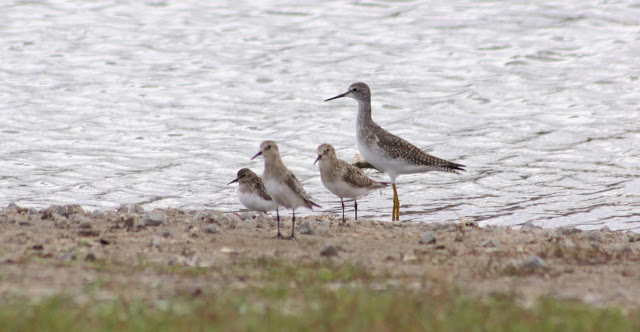 The next day I was on a plane home after a fantastic bird-filled 2 months where I’d racked up 415 species, a list of which I’ve included below, after each species I’ve added a note of where they were seen (that I can remember!)