I have a thing for birds of the Paradiseaidae – the Birds of Paradise. The males are showy, they are gorgeous; the way they shake those plumes, mmmmm…

But while most of the 39 species have those wonderful attributes of beauty and a strange sense of evolutionary…daftness…about them, many of them are not well known. The Raggiana Bird of Paradise is the national bird of Papua New Guinea, and it features on their flag and national airline planes. The Greater, Blue and King BOPs are also reasonably well known as well. However, Astrapias, Riflebirds, Parotias, King of Saxony, Paradigallas, Standard-wings and others are going about their daily lives deep in the high cloud forests or on isolated islands of New Guinea and Australia, with only the other members of their species to view their awesome displays – almost, as Alfred Russell Wallace wrote in his book, The Malay Archipelago, “a wanton waste of beauty”.

But the subject of this Obscure Bird of the Week entry has to go to one of the less celebrated members of the family. Of the 39 species, 5 of them, known as Manucodes, have retained the rather nondescript, dark, unplumed plumage which adorned the family’s corvid-like ancestors. True, the feathers do have a pretty purple-blue gloss and the eyes are a bright crimson, but compared to the other Paradise-birds, they are unspectacular.

The name ‘Manucode’ originates from the Malay ‘Manak Dewata’, which means ‘Bird of the Gods’. Though I can’t see why they would overlook the Paradisea and the Cincinurrus to honour the comparatively dross Manucodes with that title.

One of these Manucodes, the Trumpet Manucode Manucodia keraudrenii, is particularly interesting. It occurs over most of the Island of New Guinea, as well as Cape York of Australia and the Aru Islands. It is smaller than the other Manucodes, being a little slighter than a feral pigeon, has less purple gloss on its plumage, and its head and neck feathers are shaggy and unkempt looking. However, despite its appearance, sexual selection has had a strong influence on the evolution of this species, concerning its voice. The male and female are outwardly similar; however, the male has an extremely long trachea which has 6 concentric loops between the skin and breast muscles. This allows him to produce its extraordinarily loud, powerful vocalisations (which sound somewhat like a crow at times, unsurprisingly. Other calls include, squawking, whooping and trumpeting) which carry far across the forest. This is an obvious adaptation for the males to attract females, as females lack the enormous trachea.


The male does make a feeble attempt to look nice – he is slightly more colourful than the female, and in display raises his hackle-feathers to say how-do to the ladies. 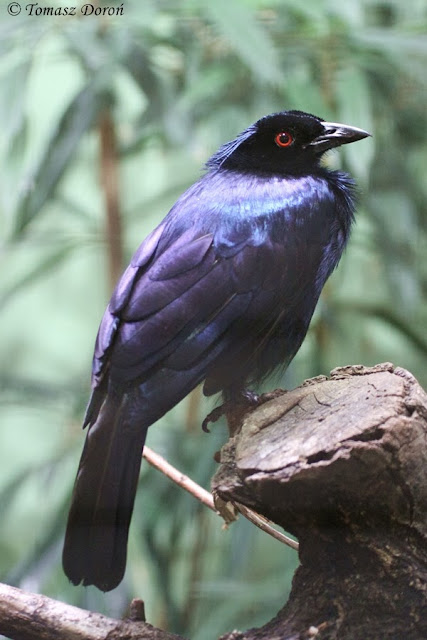 Like all manucodes, the Trumpet Manucode is monogamous and lays 2 eggs per clutch. This is in direct contrast to all other birds in the family (apart from the Paradigallas and the Paradise-Crow), which are polygamous, where males have no part in the rearing of young, and lay 1 egg per clutch. Unusually, the Trumpet Manucode feeds its young mostly figs, which is also the main diet of the adults, among other fruit. Evidence has sown that more of this species’ diet is made up of figs than in other paradise-birds.

It is classed as Least Concern, no doubt because of its relatively large range. New Guinea has some of the most pristine untouched forest with an enormous diversity of life including all but 2 (Australian) of the birds of paradise, and long may it continue.

Personally, it’s not a bird I’d go to New Guinea just to see. Though I’d happily give it a good few hours while on my way to see a Lesser bird of Paradise, or an Arfak Astrapia...or a Carola’s Parotia...mmmmm

-James O'Neill
Hailing from Norn Iron (that's Northern Ireland to you), James, 18, is interested in most branches of nature, especially fish, invertebrates and birds. A wildlife artist and, more recently, photographer, he likes nothing more than to spend a sunny day out at his patch, Lough Neagh, with his scope and camera. He enjoys travelling and aims to visit every region of the world to suss out its plethora of wildlife.
Posted by Unknown at 10:35

Email ThisBlogThis!Share to TwitterShare to FacebookShare to Pinterest
Labels: Articles, Obscure bird of the week, Viewpoints